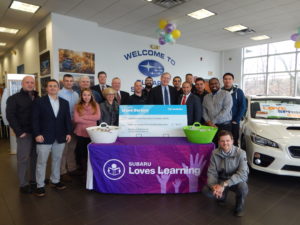 STAMFORD, CT – April 5, 2017 –  In celebration of being a Hometown Charity for the 2016 Subaru “Share the Love” event,  yesterday Stamford Public Education Foundation (SPEF) attended a celebration hosted by George D’Angelo, Dealer Principal, Subaru Stamford, in which a check for $36,437 was presented to SPEF CEO Matthew Quinones. Stamford Mayor David Martin was on hand to congratulate the Subaru team for their dedication to giving back to the community.  Also present were executives from Subaru of New England, Bryan Dumais (Director, Market Development) and Robert Bennett (Regional Sales Manager). SPEF’s Chief Executive Officer Matthew Quinones remarked, “SPEF is thrilled to be a benefactor of Subaru’s Share the Love program.  As an education foundation serving Stamford Public Schools, collaboration with generous, community-minded corporations such as Subaru is essential to providing programs and resources that enable our students to thrive.” Subaru of America has donated more than $23.4 million to national and local charities during its annual Share the Love event in 2016, bringing the total donated throughout the life of the program to more than $94 million. Held at the end of each year, Subaru donates $250 for every new Subaru vehicle sold or leased to a host of charitable partners, per the selection of each customer.  In recent years, Subaru regional retailers have selected a Hometown Charity, such as SPEF, to receive donations alongside the national charities in an effort to benefit local communities. As the Hometown Charity, the $36,437 SPEF has received from Subaru Stamford will support its educational programs serving Stamford p 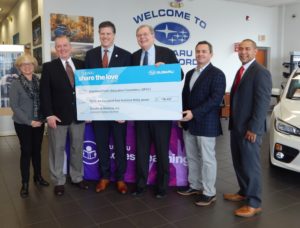 ublic schools, such as its flagship Stamford Mentoring Program that will serve more than 830 students in the 2016-17 school year, in grades 3 – 12.  “Share the Love” is a powerful example of how a Stamford business can work with a local non-profit to impact the community. About SPEF: The Stamford Public Education Foundation’s mission is to support the students and teachers in Stamford’s Public Schools through community collaboration and philanthropy. At the elementary level, the foundation supports literacy and community leadership initiatives and at the middle and high school levels its focus is on college and career readiness. For further information call 203-965-7733 or visit www.spefct.org   Barbara Aronica Buck (SPEF Board President), Robert Bennett (Regional Sales Manager, Subaru of New England), Bryan Dumais (Director, Market Development, Subaru of New England), Mayor David Martin, George D’Angelo (Dealer Principal, Subaru Stamford) and Matthew Quinones (SPEF CEO)
April 21, 2017