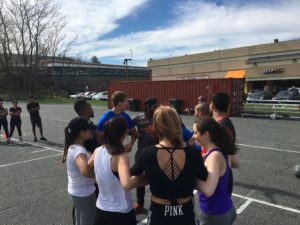 STAMFORD, CT – April 24, 2017 –  The Stamford Public Education Foundation (SPEF) has formed its second annual Tough Mudder team in order to raise awareness, extend its network, and raise funds for its educational programs. This year, SPEF hopes to bring together a team of more than thirty participants who share the non-profit’s passion for supporting the students and families of the Stamford Public Schools. The team’s goal is to raise $15,000 from the online fundraising component of Tough Mudder before this year’s event on July 23, 2017. All of the funds raised by the SPEF Tough Mudder Team will benefit SPEF’s effort to empower and educate Stamford’s next generation. The Tough Mudder is an endurance challenge that tests strength, stamina, mental grit, and teamwork. This year’s five mile course is at Old Bethpage Restoration Village in Long Island, NY, and boasts over fourteen demanding obstacles. In preparation, the SPEF Tough Mudder Team kicked off their training with Level Up at UFC Gym in Norwalk, CT, on Sunday, April 23, 2017. Level Up fitness instructor, Malcolm Wilson, led them in a team-building group training session. For further information about the members of the SPEF Tough Mudder Team and how to donate, visit https://www.crowdrise.com/fundraise-and-volunteer/the-team/spef-tough-mudder-team.
April 24, 2017