Four Stamford Public Schools Teams, Competing Against 175 Teams from Across Connecticut, Advance to Odyssey of the Mind World Finals

Stamford Advances the Most Teams in the State 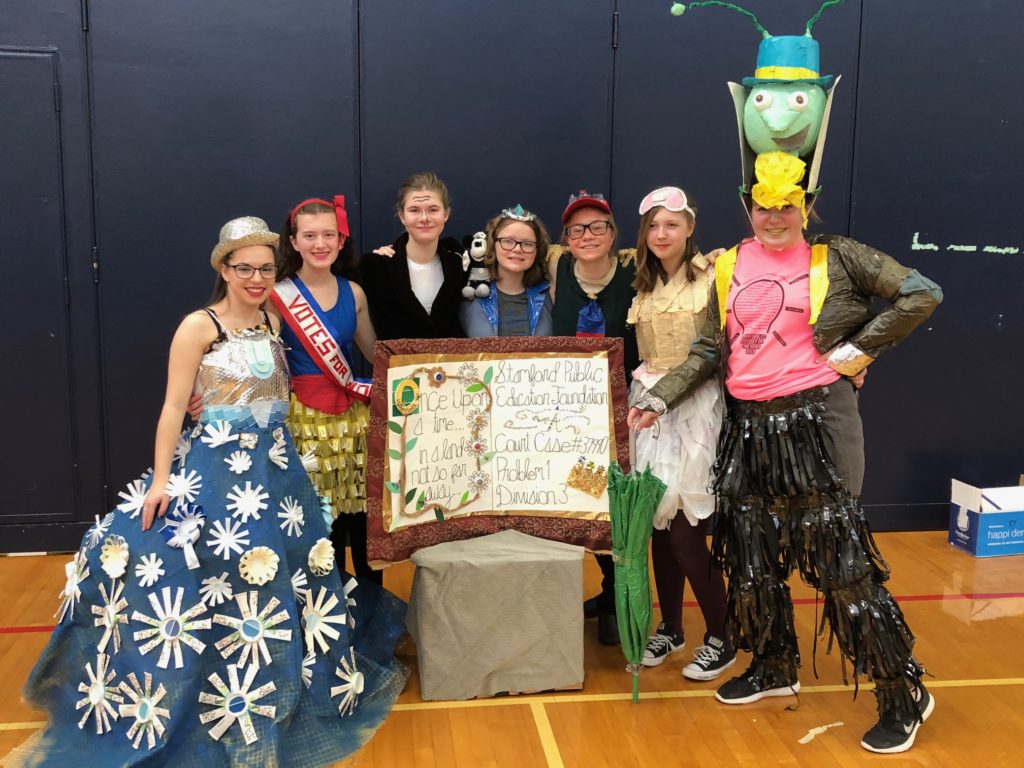 STAMFORD, CT, March 28, 2018 — Imagine being challenged to use nothing but recycled materials to build a self-propelled vehicle that can compete in triathlon-like events; creating an 8-minute performance set in the future, featuring emojis and no spoken language; or transporting your audience to an intergalactic hangout that includes original creatures, foods, and space treasure. These are the complex problems that more than 100 Stamford students took on as part of the 2018 Connecticut State Odyssey of the Mind Tournament.Four teams from Stamford (27 students) — the most teams of any district in the state —qualified for the upcoming World Finals. Connecticut Tournament: At the Connecticut State Odyssey of the Mind Tournament at Southern Connecticut State University on March 17th, 14 Stamford teams competed against 175 teams from across the state. Students from Toquam Elementary, Westover Elementary, Saint Aloysius, Turn of River Middle, Scofield Magnet Middle and The Academy of Information, Technology and Engineering earned 1st or 2nd place finishes, in their respective problems and divisions, each earning a spot to compete at the World Finals in May. “Odyssey teaches creative problem solving and challenges students to think outside of the box,” said Toquam Principal, Amy Beldotti. “The students inspire us with their creativity, collaboration and self-confidence.” World Finals: Over 825 teams from around the world will compete in the 39th Odyssey of the Mind World Finals, which will be held at Iowa State University from May 23–26.The competition emphasizes creativity, Science Technology Engineering Arts and Mathematics (STEAM) and teamwork. It is the largest international creative problem-solving competition worldwide. Moving Ahead: In order to offset the high cost of travel to the World Finals in Iowa, each of the winning teams will now embark on a major fundraising effort.Community members can support Stamford students in their fundraising efforts or learn more by visiting the program website, www.spefct.org/odyssey-of-the-mind or by contacting Stamford Odyssey of the Mind Program Director Kim Kempton atkkempton@spefct.org.

The Stamford teams who are eligible to compete at the World Finals are:

Stamford Public Schools (SPS) comprises nearly 16,000 students, over 1,500 professionals, and 21 schools, including seven magnet schools and three International Baccalaureate sites. SPS has a total of 13 elementary schools, five middle schools and three high schools. The mission of the Stamford Public Schools is to provide an education that cultivates productive habits of mind, body and heart in every student. SPS is proud that our district is as rich in diversity as it is in talent. We have students from many cultural backgrounds and geographic locations—as demonstrated by the more than 65 different languages spoken in the homes of our families. SPS offers our students a learning experience rich in cultural diversity and reflective of the global society in which they will work and live. Stamford Public Education Foundations (SPEF’s) mission is to deliver educational programs and resources that elevate student, educator and parent success by bridging the gap between needs in the Stamford Public Schools and resources in our community. It strives for each and every student in the Stamford Public Schools to graduate high school prepared and inspired to be a productive member of society. Recognizing the need for STEM-based opportunity beyond the classroom, in 2016, SPEF adopted the Stamford Odyssey of the Mind program. In addition to increasing participation in the Odyssey of the Mind program, SPEF is partnering with the Stamford Public Schools to expand its annual STEMFest Event, and is investigating and implementing innovative and creative STEM-centric enrichment opportunities for the Stamford community. Odyssey of the Mind (OofM) is the largest international creative problem-solving competition worldwide. Teams of five to seven students meet weekly for more than six months to develop solutions to one of five long-term problems in categories such as constructing a vehicle, creating a new take on a classic, building a balsa wood structure, and solving a mechanical dilemma. The solution is presented in the form of an eight-minute performance at the state tournament. Odyssey of the Mind is a unique program because it allows all kids to succeed. The program provides an extra-curricular activity for students, driven by discovery and exploratory learning. The program teaches 21st Century Skills, is STEAM focused and supports current curriculum standards. There is a strict rule that the team accepts no outside assistance, which means that they cannot ask for or receive help, even from their coaches, teachers, or parents. Their solution is 100% created by the students on the team. NOTE TO NEWS EDITORS: A complete list of competition scores is available at www.ctom.org