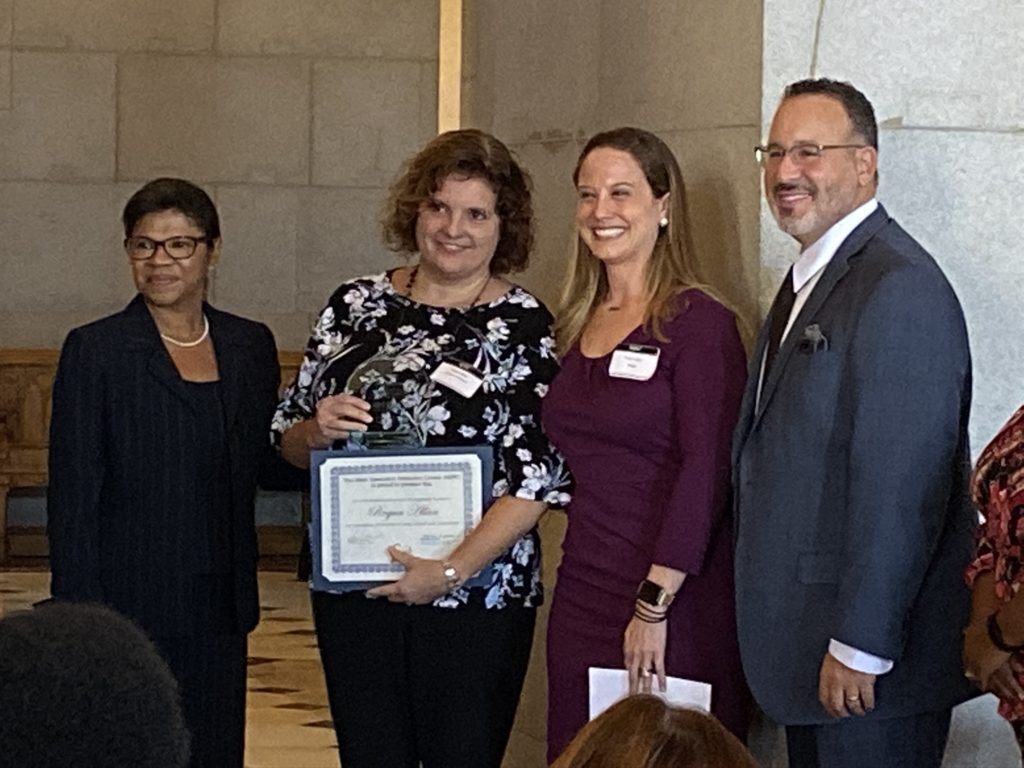 STAMFORD, CT — November 25, 2019 — The Stamford Public Education Foundation (SPEF) is excited to announce that Program Coordinator, Regan Allan, was among 11 Connecticut residents who received a 2019 Parental Involvement Recognition Award at the State Capitol last week. This award is issued from the State Education Resource Center (SERC), in collaboration with the Commission on Women, Children, and Seniors. This annual award ceremony coincides with National Parental Involvement Day, and recognizes parent contributions to schools and communities within the state. “Regan is a force to be reckoned with” says SPEF Program Director Lindsay Wyman. “She brings a deep sense of purpose and commitment to everything she does. She fiercely believes that all children deserve a high quality education, and fights daily for this to be true in all of the work that we do in the Stamford Public Schools.” Community organizations, school leaders, and others are invited to nominate parents or guardians who have exemplified parental involvement and engagement in schools as well as community organizations. Award recipients were selected based on their active involvement in their child’s/children’s school and/or community: Regan Allan has been a long time resident of Stamford, having two children who have graduated from the public school system and two who are still in school. Following participation in the Parent Leadership Training Institute (PLTI) while her oldest child was still an infant, Regan was inspired to make a difference within her community as an advocate for children. She has since taken over as Program Coordinator for PLTI, the Odyssey of the Mind enrichment program, and the Service-Learning mentoring program which are provided by the Stamford Public Education Foundation. An additional Stamford parent was awarded, Yadira Esquivel, nominated by the Exchange Club Parenting Skills Center. The official 2019 winners of the Parental Involvement Recognition Awards include:
November 25, 2019