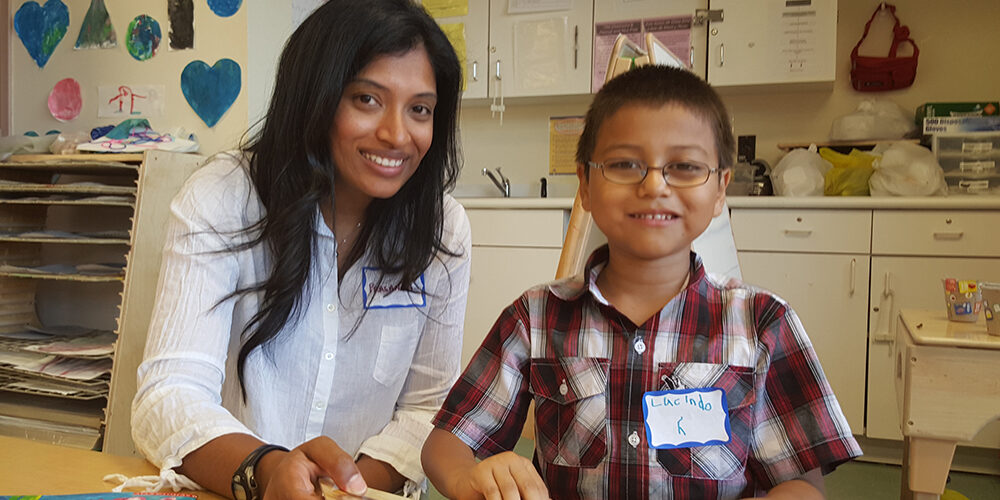 Encouraging Student Readiness and Parental Involvement in Stamford’s South End STAMFORD, CT – July 28, 2015 – Last night approximately 25 English as a Second Language (ESL) students from Stamford’s South End gathered at the Lathon Wider Community Center for a literacy focused event. The summer edition of the Family Literacy Night series engaged students grades K-3, giving them the opportunity to practice their reading skills while their parents met with their teachers. Through a partnership between The Junior League of Stamford-Norwalk (JLSN) and the Stamford Public Education Foundation (SPEF), Family Literacy Nights were launched in 2013 to boost school readiness among kindergarten and first grade students in Stamford’s South End who attend Springdale Elementary School. The program has followed those students as they progress a grade, and introduces new kindergarten children to the events.

Last night’s event was of particular importance as students are often subject to the summer slide – the loss of reading skills that occurs while they are away from schools and their libraries. A 2011 paper from the National Bureau of Economic Research found that low-income students are particularly susceptible to this. According to their research, for every one line of print read by a low-income student, middle-income students read three. “Access to books and reading opportunities during the summer are critical to maintaining the lessons these students learned during the school year, “ Junior-League President Lindsay Bohnsack said. “And the kids are eager to take advantage of it, they love engaging with our volunteers.” Giving the parents access to their child’s teacher is of equal importance. “It is important to us that this program takes place in the comfort of their own community, in their own language, creating a safe space for these families to speak openly about the challenges they are facing,” said Sennéa Raslan, SPEF’s Director of Operations. The event ended with a special back-to-school twist on the goody bags handed out to the participants. Each child was given a draw-string backpack stuffed with pencils, crayons, erasers and other back-to-school supplies as well as the books they had read. JLSN and SPEF plan to host four Family Literacy Nights during the 2015-2016 academic year. About the Junior League of Stamford-Norwalk One of 293 member Leagues of the Association of Junior Leagues International, the Junior League of Stamford-Norwalk, Inc. (JLSN) is an organization of women committed to promoting voluntarism, developing the potential of women and improving the community through the effective action and leadership of trained volunteers. Its purpose is exclusively educational and charitable. JLSN has close to 400 active and sustaining members residing in Stamford, Norwalk, Darien, New Canaan, Wilton, Weston, Westport and Ridgefield.
July 28, 2015