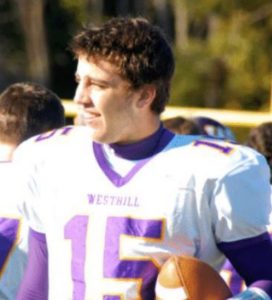 STAMFORD, CT — June 9, 2018 — Just shy of six years ago a varsity football quarterback from the Westhill High School headed off to Vermont for college. Just days later he met with a tragic accident and passed away. The Peter Cernansky Memorial Golf Tournament and Dinner was established by his parents to honor the memory of their son, who loved team sports—for the competition as well as the camaraderie of his teammates. This year’s 6th annual event is being held on Monday, June 18, 2018, at the Rockrimmon Country Club in Stamford. In addition to the golf tournament, which kicks off at noon, the day features a Welcome Brunch starting at 10:30 a.m., Silent Auction throughout day, and Cocktails & Dinner starting at 5:30. Golf registration and dinner tickets are available at: http://pcmgolf.org/ The grandest prize: If a golfer at the Tournament sinks a hole-in-one on the 9th hole, the Callari Auto Group is providing the winner with a selection of three vehicles to choose from: a 2019 Volvo XC40, from Volvo of Westport, a 2019 MINI Countryman SE Hybrid from MINI of Fairfield County, or the 2018 BMW X2 from BMW of Darien. All valued at approximately $45,000. All cars will be on display on the greens at Rockrimmon during the Tournament. Proceeds from the Tournament fund Purple PACT (Players’ Academic Counseling and Tutoring Program) at Westhill High School, which fosters positive student-athlete development and growth: academically, athletically and social-emotionally. The Fund supports a similar program at Stamford High School: Knight Life. This year the Stamford Public Education Foundation (SPEF) has been invited to partner with The Peter Cernansky Memorial Fund to help ensure the longevity of this meaningful and engaging event. This non-profit agency will receive a share of the proceeds to fund its Stamford Mentoring Program, which served 900+ students this year. Top-Tier Sponsors for the 2018 Peter Cernansky Memorial Golf Tournament include: Viking Sponsors—Blackstone, Deloitte, KPMG, PricewaterhouseCoopers, and John & Diane Samuels; Gold Sponsor—EY; Purple Sponsor—The AthLife Foundation; Hole in One Sponsor—Callari Auto Group-BMW of Darien; Media Sponsor—Serendipity. About The Peter Cernansky Memorial Fund: The Fund was established to honor the memory of Peter Cernansky, a 2012 Westhill High School graduate who passed away just days after beginning college in August 2012. The Fund’s mission is to help all kids make the transition through adolescence into adulthood by providing resources that help students to thrive, particularly athletes who need extra academic, social and emotional support to excel. The Fund also provides financial support for a scholarship in Peter’s memory that is awarded annually to a graduating senior in the Westhill HS Academy of Finance program.
June 9, 2018